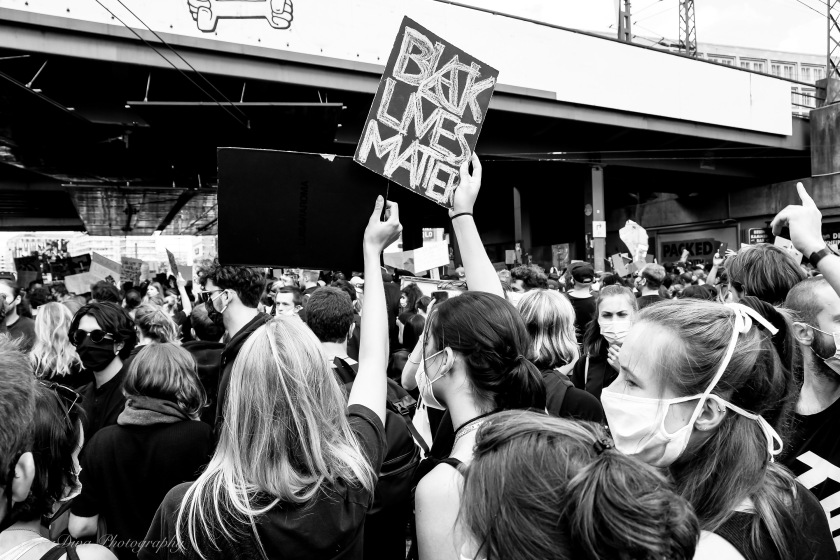 The announcement for today’s silent protest was spread through social media, and the original meeting place was Potsdamerplatz at 14:00, come dressed in black in support of Black Lives Matter. When Maike and I emerged from the subway and headed towards the meeting place, it struck me that there were very few people joining this event, and was almost disappointed to see the small gathering. Minutes later we found out why that was – the main event had been moved to the Alexanderplatz at the last minute. The group that had assembled in Potsdamerplatz got on their bikes promptly at 14:00 and rode over, while the rest of us took the subway.

If I harboured any doubts of a significant turnout, those vanished within seconds when we were swallowed up by a sea of black, crowds of people coming from all directions and speaking all languages all headed in one direction. That in itself was already a powerful statement, and it was fascinating to see how everyone had adhered to the request to come dressed in black. Then again, this is Berlin where black attire is a given regardless of whether you move in corporate formals or street grunge.

The closer we got to the main area the more I began to clamp up and panic inwardly. I have a long-standing phobia for crowds, and being the short Asian among the forest of teutonic giants is asking a lot from me. Nevertheless, I had promised Maike that I would stand by her for this, and it would be an opportunity to tap my photojournalistic side again. How I wish I were at least a meter taller! As I write this, my right shoulder is in pain from stretching my arm up as high as I could to get some decent perspective above all the heads!

Weaving our way through the throngs of people was no easy feat for me, and I would have preferred to turn around and run as fast I could. But darn it, the camera is empowering and there were several images I wanted to capture, if not for me, then for the sake of documenting the emotional social transformation unfolding globally.

The last time I joined a demonstration was 1986, during the fateful People Power in the Philippines. Today’s protest had a completely different flair to what I experienced back then, but nevertheless, to be part of something this significant is exciting, scary, fascinating, and frustrating all at the same time. Kudos to all the young people who turned up (total turnout today was 15,000) and kept the protest peaceful. Thought it was intended as a silent protest, there was singing, chanting and rhythmic clapping going on for three hours.

At some point, my inner claustrophobe surrendered and I couldn’t take it anymore. I withdrew to a quiet corner to catch my breath, while Maike continued with the rest of the masses until the dispersal. This gave me time to reflect on my emotions over the whole event and I must admit I walked away disappointment that not more people of my age group / generation showed up. I want to give them the benefit of the doubt and say maybe they were at one of the other parallel events, but in general I stuck out like a sore thumb among all the youngsters. Is this perhaps a reflection of the Babyboomer apathy that has taken over?

On the other hand, let’s be objective about this and say that this was a group of 15,000 people who chose to throw caution to the wind today and stick out a middle finger to all the Corona Virus precautions. There was not an iota of social distancing today, and this was an incredibly risky move bordering on the stupid. I am pretty sure that if today’s event had not been preceded by the #lockdown2020 there would have been 150,000 instead of just 15,000.