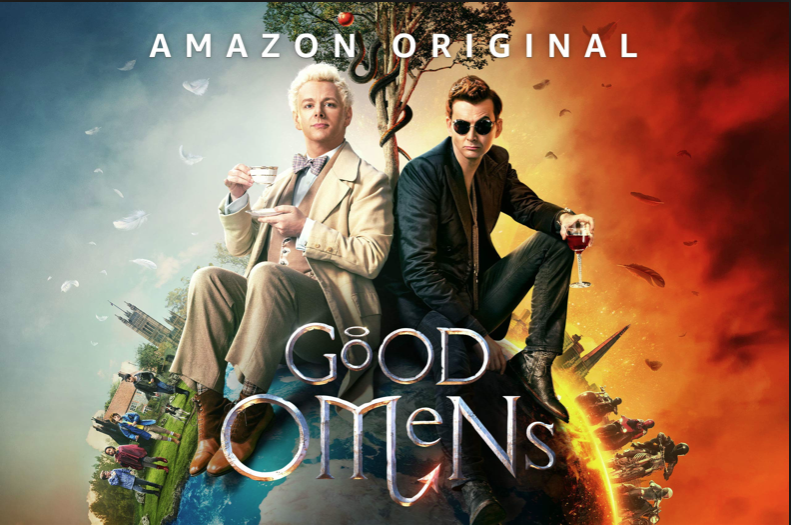 I just read a brilliant sentence describing the selfie as being a diabolical invention, and absolutely agree! But that is beside the point. I wanted to find out what all all fuss was about surrounding Amazon Prime´s Good Omens. If the pious Christian groups are to be believed, the devil incarnate has taken over the blasphemous entertainment world, setting Terry Pratchett and Neil Gaiman loose on the innocent and hapless mankind. Nothing could be further from the truth, considering that the two authors of the book on which the series is based are the most brilliant minds of their respective genres that could have ever come together for a joint project.

Nothing short of show-stopping and mind-boggling should be expected from these two, and if you know your bible, TV shows and movies well, you the viewer will be blown away and highly entertained by this mini-series. The combination of overt social commentary, biblical references depicted with a modern interpretation to adapt to the modern world, and the humour par excellence is classic Pratchett and Gaiman. Yes, the show is a bit snobbish in a sense because it demands from the audience a fundamental knowledge of history, current events, and christianity, for without it, you miss out on the historical puns.

First a word to those who petitioned to have the series cancelled by Netflix: Hello? It is an Amazon Prime Original you nincompoops, get your information straight before launching such a petition. I am reminded by a similar controversy the surrounded Dan Brown´s The Da Vinci Code when it came out. People wanted it banned from libraries, the movie was not allowed in some countries, and even the Catholic Church got involved in the commentary and discussions. I remember at least one parish priest here in Berlin organising a discussion evening surrounding the book and all the issues. But at the end of the day, it boils down to the public being able to distinguish between entertainment and theology. If you cannot do that, then you are in serious trouble with Good Omens, and a host of other movies and TV series that deal with angels and demons.

For the homophobes out there, you will also have issues with the relationship between the two main characters. Although the jury is still out on whether it was intended to have LGBT shades, I really don’t care. The character development is superb. What does bother me is why society is so quick to judge such a good friendship between two men as gay, or the show be singled out as a gay romantic comedy. If any friendship can endure 6000 years, of course the parties involved are going to be emotionally invested and be willing to sacrifice heaven and hell for the other. That is what friendship is.

It goes without saying that casting Michael Sheen and David Tennant is beyond reproach. I am not sure I can imagine two other actors more perfect for the roles, physically and in terms of their ability to deliver exactly the way Pratchett and Gaiman intended them in the book. Oh, and the fact that God is a woman is heavenly!

Good Omens is probably one of the best tributes to Terry Pratchett the entertainment and publishing world could have even conceived. I completely agree with one reviewer who said is worth binging several times over.