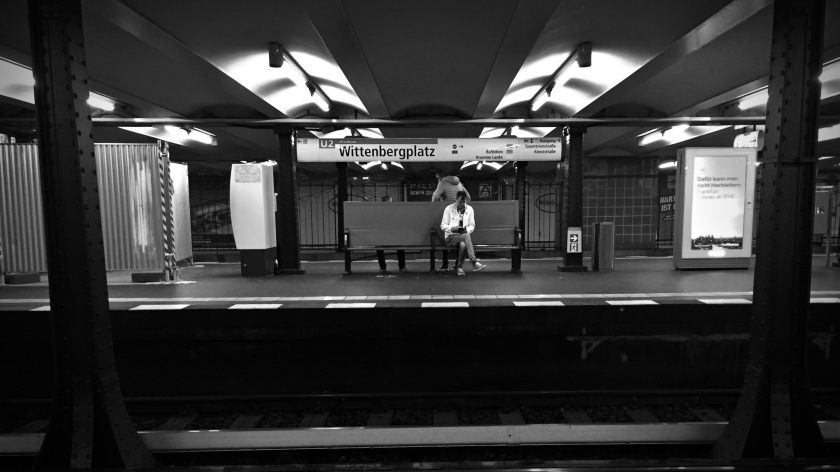 The Berliner bus drivers have the worst reputation in Germany, and it is really no surprise at all, once you begin to deal with them on a regular basis. Up until two weeks ago, the bus was my primary mode of transportation to work, but the bad tempered drivers and overcrowded vehicles during rush hour began to grate on my nerves. I use the 45-minute ride to catch up on Instagram, read my morning mails, and simply watch life around me.

The other day the bus driver was in a particularly bad mood since someone kept pressing on the stop button for every stop but nobody got off. He growled into the microphone that if nobody was going to get off to please stop playing with the darn button, and we all looked around for the guilty party, assuming it was perhaps a child or a senior citizen doing it by accident, but nobody claimed responsibility. It was standing room only, and onwards we trudged with our megagrump at the wheel. Then the woman standing next to me whispered “It is you”. I stared at her in horror, and she smiled gently and pointed out that I was leaning against the lower stop button for disabled people on wheelchairs or parents with prams. I never look down at that level, and hence didn’t realise the existence of such a stupidly placed button located at thigh level. All it takes is a bag, a backpack or an unassuming commuter standing to trigger it. It wasn’t my intention get off at the next train station but I did so hurriedly, and wanted no more of that bus ride!

The train ride was no less adventurous. There was a homeless drunk who got on and made everyone in the car uncomfortable with the mumbling and swearing, dancing to a music that nobody else could hear. I thought at first it might be a case of Tourette syndrome, but then I spotted the beer bottles (yes, plural) and discarded my initial suspicion. Some of these commuter drunks can be entertaining, but others just scare the daylights out of me. This one in particular made me sad. She couldn’t have been more than 24, had needle track marks on her arm, and was  becoming aggressive. It made me wonder what could have driven her to the streets and into such a state at such a young age. The violence that she must have undergone, and the abuse she must have endured that made life on the streets much more appealing. I got off before she did, and as the train pulled away, I couldn’t help but wonder where she would spend the night.

I had a doctor’s appointment two days ago and I had to rush away from the office to get there on time. My head was in the clouds and ten minutes into the ride on the subway I realised I was headed in the wrong direction. Right train number, but headed south instead of north. Talk about being frustrated with myself! But the advantage of subways is that it is easy to remedy your mistake… get off at the next stop and take the train back. So far so good with the theory. Naturally, rush hour was in full swing and the trains were full. Since I was pressed for time, I didn’t exactly have the luxury of choosing a wagon and jumped on the first one that crossed my path, making my way towards the first seat I spotted a seat. The man seated stared up at me, refused to move his backpack from the empty seat beside him, and instead proceeded to take out a banana and eat it, staring back defiantly at me. I had no patience for this stupidity or any inclination to make a scene on a crowded train, and moved on. But he had absolutely no problem making room for the young Caucasian woman behind me. Berlin continues to be the only city in Germany where I keep running into blatant racism and it annoys me to no end.