What do you hang on your Christmas tree? For as long as I lived with my parents, all the decorations on the tree were handmade by Mommy. These lovely felt decorations were the results of a sewing group she was part of while we lived in Mexico. She added a few every year, including a Christmas tree skirt and stockings for each member of the family, adding some along the way as the family expanded. If we had guests over the holidays then she always made sure each person had a stocking of their own as well. It was all about kindness.

We collected a few glass baubles over the years, but she never liked them, and as a result, neither do I. By the time I turned 12, the majority of the tree decorations were stuffed felt items, lights and a candy canes. For practical reasons, our tree was always artificial and fully loaded. Daddy was always in charge of assembly, and had a very strict manner of stringing the lights that nobody was allowed to interfere with. Mommy and I were only allowed to decorate once the perfectly engineered tree and lights were declared fit (and safe) for the season.

Things got complicated around the Christmas tree after I got married and had to incorporate German tradition, which included straw stars, apples, small wooden ornaments and glass ornaments. The decorations were placed sparingly on the tree, and everything finished off with the candles on Christmas Eve. The electrical lights on the tree were an abomination my mother and father-in-law never subscribed to, like any good self-respecting Black Forest family! Imagine then, the clash of cultures when it came to decorating the tree. I found the German version too bare, whereas my Filipino-American version was considered to be overloaded.

I miss my mother’s handmade decorations, but I have my tree entirely decorated with capiz ornaments, purely Filipino. It’s a reflection of my heritage, but also a way of reminding me of the beautiful Christmases I spent with my parents while growing up in Kenya and Mexico. In spite of the international exposure, Mommy made it a point to always incorporate a Filipino element, and during her last Christmas with me in 2015 she smiled at the tree and made me promise that I would pass on all the Filipino decorations to my daughter, knowing she would be studying in Italy. 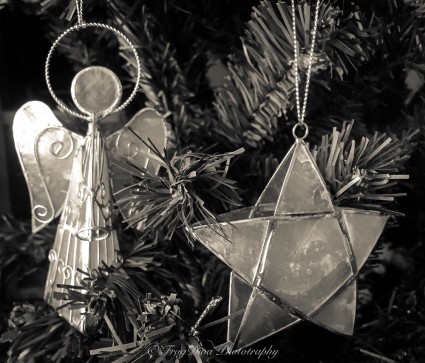 Now that I am on my own, this is the very first year that I am decorating full scale again. Looking into the history of the Christmas ornaments, however, I discovered that once again the roots of the tradition are traced back to Germany – specifically Lauscha, Germany (Thuringia). It was Hans Greiner (1550–1609) who created the first decorations out of glass and tin, fashioning strings of glass beads and cutting out tin figures small enough to be hung on the trees. This then evolved into an entire industry for artisans who elevated the craft to an art form. It was the skilled artisans who started mixing silver nitrate with the glass to give the ornaments their special shine. By the 1850s, Justus von Liebig had perfected the craft and added the cap and hook that makes it easier to adorn the tree. (source: Wikipedia) It didn’t take long for the concept of the tree ornaments to spread, marking Lauscha’s spot on the map with its unforgettable contribution for Christmas.

Queen Charlotte first introduced the Christmas tree in England in the 1800s but it was Queen Victoria who went all out with the decorations in order to honor her husband’s German heritage. The Lauscha Christmas ornaments crossed the Atlantic and made their first appearance in New York courtesy of F.W. Woolworth in 1880. The US production of the Christmas ornaments had actually began a decade earlier with another New Yorker, William DeMuth. Sadly, the Lauscha factories were shut down after World War II. “As of 2009, there are still about 20 small glass-blowing firms active in Lauscha that produce baubles. One of the producers is Krebs Glas Lauscha, part of the Krebs family which is now one of the largest producers of glass ornaments worldwide.” (Wikipedia).

The Zen of Spring