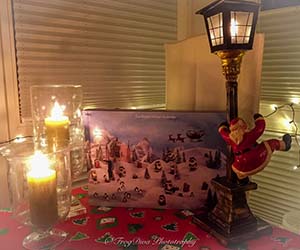 I had a completely different topic prepared for today’s blog, but as things happened, the package delivery madness continued. At this rate, I’ll begin taking photographs of everyone to start a proper series! They are just always in such a hurry that it is impossible to interview anyone. In any case, the day began with a very harassed mailman from the regular Deutsche Post. One shouldn’t judge the book by it’s cover, but no matter how much I smile at him, he just scowls deeper and seems to add to his wrinkles each week. There is no way I am going to have a nice congenial chat with this fellow, and I get the feeling he is just waiting for retirement day.

Then came the Bofrost (frozen foods) delivery man. He comes around once a month on a pre-announced day but I’ve missed the appointment for the last two months and my freezer was looking rather lonely. I had pre-ordered several items because I was expecting guests, and his visits are always pleasant, the bonus being the entertaining updates on the family. Today he put an extra smile on my face by bringing me a chocolate Advent calendar. I hadn’t planned on one this year, 1. because it isn’t my tradition and 2. I went along with it all the previous years mainly for my daughter’s sake. I avoided the store-bought ones and usually stuffed her advent calendar with assorted little trinkets, candy and poems. Now that I live alone, I just wasn’t motivated to do it for myself. But when the calendar was presented to me this morning, there was absolutely no way I was going to turn my back on it!

The cat was of course on full alert and listened politely to all the conversations at the door. She waits to be greeted as well. There is only one mailman who doesn’t give a hoot about her, otherwise the rest will always bend down and greet her. My shameless kitty will purr and reciprocate, treating everyone like a long lost relative. It was no different today, and she knows the Bofrost delivery man too, not just because she likes the person, but because she has her eye on the delivery box.

The Amazon delivery man dropped something off at my neighbour next-door but also rang my bell at the same time. So it was rather amusing to open the door and have a cheerful greeting from all and sundry, with the chirpy mailman calling out “hang on, I’ll be right with you!” and dropping all his packages at the same time.

The central station atmosphere continued well into the afternoon. My second favourite delivery man is as big as a bear but gentle as a lamb, and when he rang the bell today, he had sad eyes and a concerned look. He asked whether I would take a package for the lady across the street, and when he saw my perplexed look, he explained worriedly that she is basically my counterpart, the one who accepts packages for everyone else in the building, but now that there is one for her, there is nobody home to receive it and return the favour. The system here in Germany is such, that if your package arrives and you are not home, it will be left with a neighbour (if they are home) and a notification will be dropped in your mailbox to inform you where to track your treasure. This is how I have met practically everyone in my building, either handing out parcels or hunting for mine! Before he left, though, I handed over mini chocolate snowmen and a small stuffed teddy bear (I belong to a chocolate club, so I  have way too much chocolate in the house, but that is a story for another day). His face lit up like the lights on my Christmas tree! He is not German, and I’m pretty sure he’s feeling a bit homesick these days, so a little Christmas cheer goes a long way.