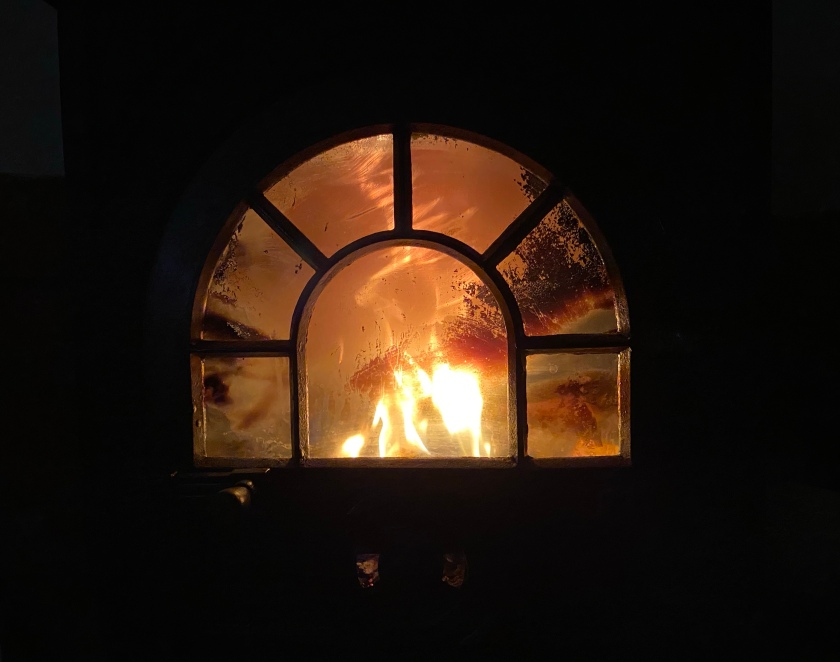 For someone who grew up in cities around the world, the concept of a fireplace with a roaring fire is something that existed only in fairy tales or romance books, a lofty dream so unattainable it was not even worth pursuing. First of all, most of the countries I lived in were tropical, so air conditioning and electric fans were the priority. Guess what? Dreams to come true!

The temperatures have been dropping steadily in the Shire and this week there were three mornings in a row where Cherry and I woke up to 12C. Brrrr. The first thing I do after I get up in the mornings is to open all the windows to air the house, something been doing for decades, regardless of where I am. It is not only good Feng Shui, but there is nothing like letting the fresh morning air into the home after a long night with closed windows. Well this morning it was very overcast and windy. The dirty look I got from Cherry was priceless! By the time I sat at my desk and fired up the computers, it started raining. Double brrr. OK, that time of the year for socks and sweaters has arrived, just in time for the beginning of October. Autumn has reached the Iberian Peninsula folks!

The longer I sat at my desk the less I saw of the valley and the neighbours across the road. The rain continued throughout the morning and at some point I contemplated turning on the heater. Then it occurred to me, I live in a house with two fireplaces. Bloody hell, might as well light one of them and I chose the one in the cosy nook which is closer to the office. It is also the old fashioned one that takes wood (not to mention patience and matches). Thank goodness for my years as a girl scout leader and all those hours of teaching the girls how to light a bonfire – tinder, kindling and firewood, because otherwise I would have stared blankly and cluelessly at the fireplace. OK, yes, one must adhere to the Fire Triangle of heat, oxygen and fuel, but a little experience goes a long way.

So instead of cooking lunch, I found myself firing up the chimney, much to my delight and the cat’s consternation. After a couple of false starts, I got what I wanted and what a joy! The rain stopped several hours later, by which time the fire had died down and the house had warmed up significantly.

This evening has to be one of the most romantic I have had in ages, despite the fact that it was just Cherry and myself. Sitting by the fire, a snoring cat beside me, silence outside, and gorgeous piano music. How disgustingly idyllic is that? Stop laughing please, I still can’t believe my good fortune of living out one of my childhood dreams! I fully understand and embrace the meaning of a crackling fire now.

To jazz thing up, I placed a small bowl of water with grapefruit essential oil on top of the fireplace and within minutes the whole house smelled gorgeously citrusy. Talk about aroma therapy on a large scale! Now, all I need is for Gandalf to knock at my door and offer me the adventure of a lifetime!