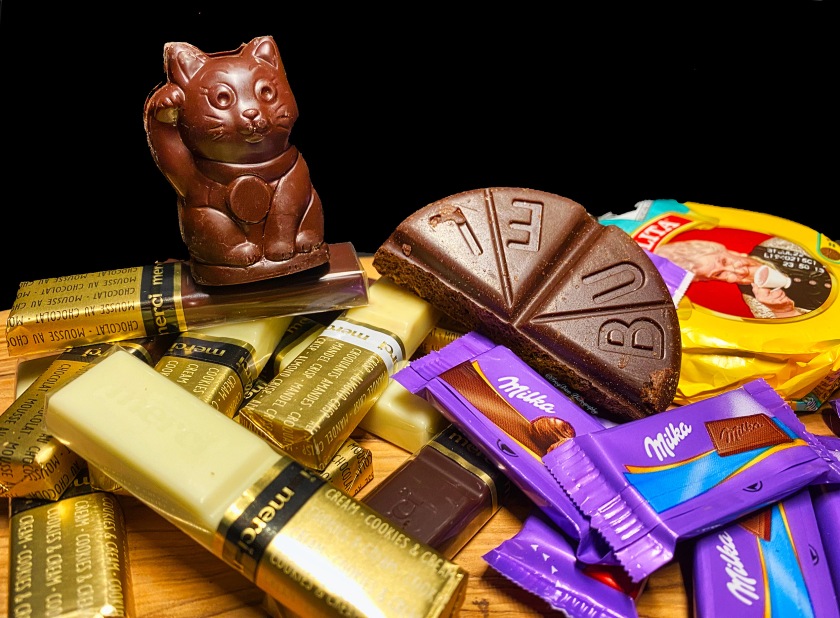 I know, I know, chocalitious is not a proper word but you will find that it has melted its way into some of the blogs. I’m not convinced it should be formalised at all, but for my moment of weakness, I will declare a truce.

The soon-to-be-boxed-up Christmas season has traditionally been used and abused as an excuse to over-indulge, binge, and basically blast every diet to kingdom come. Maybe this is why New Year’s Resolutions were invented, a petty excuse to pacify the conscience and crawl our way back to penance and the good graces of the weighing scales just in time for Easter. Well, I for one don’t believe in New Year’s Resolutions – the concept is an ocean of malarkey, because you don’t need a special day to resolve to change your life. It can be done at the drop of a hat any day, you simply have to be willing to do it and stick to your convictions. On that note, chocolate can and should be indulged on throughout the year, pretty much like ice cream, irreverently so especially when the weather says otherwise.

Chocolate is a sticky subject for many people. There are those who are not picky at all, as long as they can sink their chompers into a bar or two. Then there are people who have very strong opinions about nuts and fruits, and I know some who get violent over marzipan-filled pralines. I for one can be coaxed out of a temper tantrum with dark chocolate and hazel nuts, or mixed fruit, but definitely not orange-flavoured ones. Mint yes, coconut as well, caramel maybe, cherries with schnapps no, nougat preferably not before a meeting, and the list goes on. At the end of the day it is a very personal choice, and so are the brands. It’s almost impossible to say no to French or Belgian truffles, but I will turn down any and all manifestations of Cadbury. Oh but Lady Godiva? Absolutely divine! Ah, but hand me a supply of Reese’s Peanut Butter cups and I will forgo my maiden name!

Sadly, because I inherited diabetic genes, I have to behave in a disgustingly restrained manner around chocolates, which is a good thing I supposed, because it’s healthy, but on some days the craving for the dark gold is almost too much to bear. I usually have a bowl of M&Ms handy, but I stopped last October in preparation for … hell, I’m not even sure anymore. I would love to say Halloween and Christmas but that’s not even a valid excuse. I just stopped cold turkey and turned my violence on cheese instead.

What has gotten into me, you might wonder… well, in a word: chocolate. Not just any chocolate, but a blast from the past. I was given two boxes of Abuelita chocolate tablets (tableas) earlier today, flown in from Mexico. I haven’t had them since 1981 but their unique flavour is so deep in my memory that it is impossible to forget. Flavour memories are indelible imprints in our soul intrinsically intertwined with emotions that are easily triggered and never forgotten. Some people link their flavour memories to people, or certain celebrations, and perhaps there is something from your childhood that you spend your entire life chasing, only to discover that it wasn’t just the food, but the place and the people that you missed. This is how I felt about Abuelita tableas. The strong cinnamon flavour explodes in my mouth from the very beginning, and as a child I used to nibble on chunks of the chocolate wheels with more passion than the hot chocolate that my mother made with them. Even if I tried to re-create the hot chocolate with these tableas, I know it won’t be exactly the same because Mommy would be missing in the flavour memory.

Strange how the past sometimes manifests itself in the present and worms its way into consciousness. But on days when I question the validity of many things, something like this happens and I remember that this is the time to recover, restore, and own vulnerability. Chocolate it is!