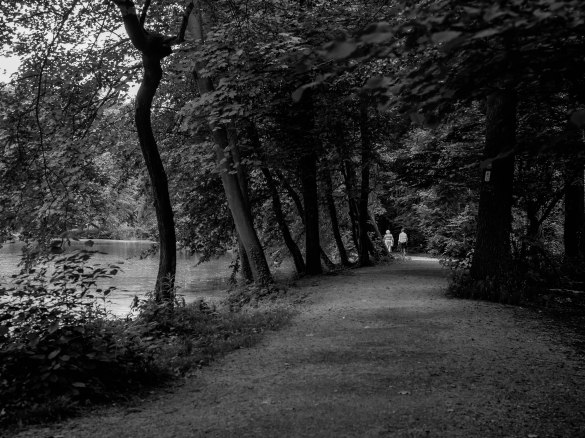 My favourite German poet is Rainer Maria Rilke for many reasons, one being the depth of emotion brilliantly composed in the simple words. His style reminds me very much of Robert Frost – images of a bygone era that speak to the soul and conjure memories and fantasies alike. Like a good photograph, the words need no further explanation.

Understand, I’ll slip quietly
away from the noisy crowd
when I see the pale
stars rising, blooming, over the oaks.

I’ll pursue solitary pathways
through the pale twilit meadows,
with only this one dream:
You come too.

I found these beautiful lines this morning in English to accompany the photograph and ended up leaving far too late for work because I simply had to find the German original:

I have a problem with the propriety of this text though. The English translation has been classified as a standalone poem called Pathways. The German original, however, is part of a collection of advent poems written by Rilke and published in Leipzig in 1898. How the transition came to be that Pathways became the title in English I don’t know (yet). This particular Rilke poem is classified in German under love poems, but that was the furthest from my mind when I found the lines and choose instead to attribute them to soul searching.

The charm of solitary pathways speaks to me on a spiritual, emotional and photographic level, all drawing me into a zone where time is suspended and all that matters is space, composition, and expression. This is a zone where I can get in touch with that inner voice and reach out the Self that is yearning for nurturing.

Learn to love myself, that has been my homework assignment in therapy for a couple of weeks, and it is much harder than I ever imagined. So I began by learning to love the simple things around me that give me strength and courage.