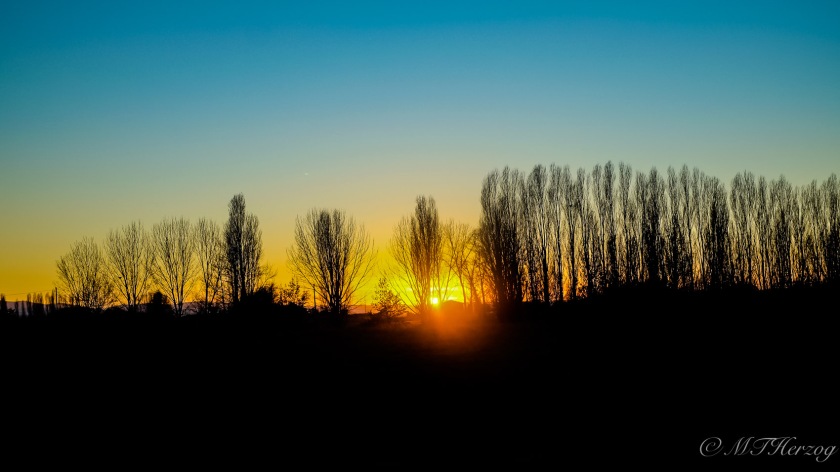 For the third time in my life I moved on December 27. Well, technically it wasn’t me this time but close enough… my daughter. (December 27, 1993: Biberach to Bonn, December 27 1991, Biberach to Berlin). Unbelievable but true, her gap semester is over, as is the transit time in Germany. So the day before we packed everything up and yesterday loaded up the rental car and hurtled down the highway towards Florence, Italy which will be her home for the next three years. The car was full to the rafters because her boyfriend and I both have full luggage with us, since neither one of us is flying back via Germany. Amazing what one can acquire and accumulate over six months…

The drive through Switzerland reflected Switzerland itself – quiet, clean, smooth, efficient and unbelievably picturesque. In the interest of economy and time management, we didn’t stop to eat or do any sightseeing. It was dreary and foggy anyway, and the navigation system had announced several traffic hindrances along the way that would definitely eat up some travel time.

I fell asleep right before we entered the Gotthard Road Tunnel and when we emerged on the other side you knew immediately that Italy could not be far away with the legendary blue sky and sunshine. The snow-capped mountains that stood as silent and dignified sentinels for the remainder of the Swiss side and as you cross over into Italy reminded me of giant elephants.

Considering the good time we were making on the road we decided to drive all the way to Lake Como and make a major pit stop there for a late lunch and a bit of a walk to stretch our legs. It’s a good thing the two lovebirds cuddle as much as they do because they had very little space in the back seat, having had to sacrifice part of it to luggage. Oh but what a stunning view at Como! I basically forgot about my hunger and headed straight to the viewing deck with my camera. More sunshine and milder temperatures than Germany and Switzerland, all in the double digits! We tried, but we couldn’t find George Clooney’s villa!

Sunset found us along the highway passing Milan. The A1 is a very long, straight and incredibly boring highway, but it is five lanes and it skirts around the major cities along the way, so you can make good time if traveling from north to south. It is called the Autostradra del Sole (the Highway of the Sun) and for a good reason. Even though we couldn’t stop, I decided to test the capabilities of the Fuji X-T10 once more and see what I could do about a Tuscan winter sunset…

When driving into this area, you have a choice of the via Panoramica or the via Diretissima. The panoramic view is fine day and will take you longer, but if you take the more direct route you end up feeling like a mountain mole because it is an endless series of tunnels and since you keep losing satellite signal your navigation systems go bonkers. By the time we hit Florence it was dark and the fog was so thick we could barely make out what was in front of us. It was a visibility of three meters, maximum, which is a very scary thing when driving in unfamiliar territory. When we visited two years ago we came by train, so the roads were of no concern at the time, and it was summer.

Driving within Florence can be a harrowing experience as we soon found out, but also trying to find your way into the old part of town with a navigation system that is not up to scratch. But we eventually found our apartment and settled in. Parking is a different story altogether… The adventure begins! Stay tuned for the next chapter!

Fragments of a Dream