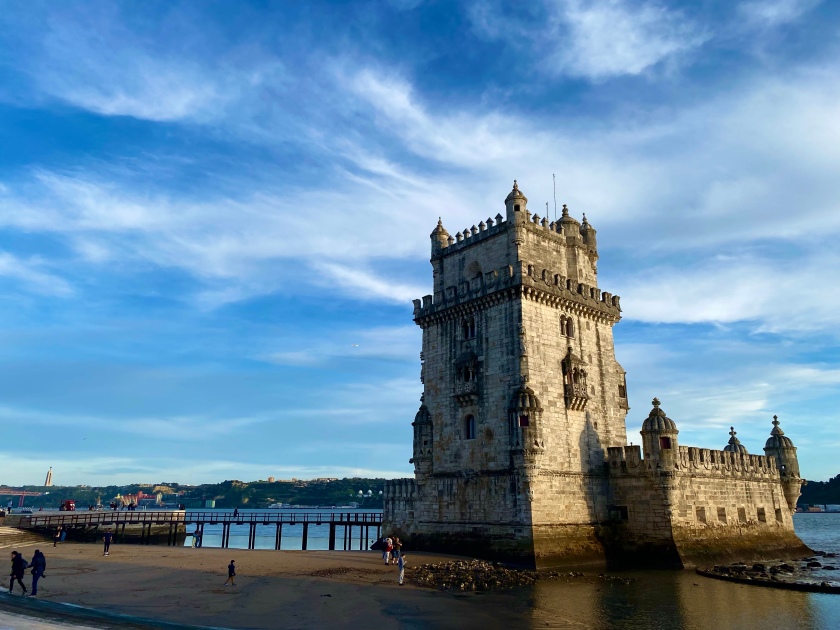 I woke up at some ungodly hour this morning to the call of nature. I know, this is not the most poetic way to start a blog but hear me out… hostel life is always a challenge in many ways, one of them being that the bathrooms are never just around the corner or you have to wait your turn. In my case, the designated facility for my room is one floor up and I need a key to enter the area. Oh my. So by the time I got back to bed I was wide awake and there were still two hours left before my alarm was supposed to go off. Ho hum. So I chose to plot an after-work escapade and begin exploring my new hometown.

There are endless things to discover in Lisbon, you just have to choose a starting point. This being the port of some of the greatest explorers the world has ever known, I chose to honour adventure and travel by setting foot on hallowed ground so to speak. The Tower of Belem, or Torre de Belem as it is called locally, has been the ceremonial gateway of explorers since the 16th century. UNESCO has declared it a world heritage monument, as testimony to the Age of Discovery, well this is the FrogDiva’s Age of Discovery in more ways than one. It was a private triumphant moment as I held my camera in hand after such a long time, and faced my beloved water and sunset again, reminiscent of my Manila Bay soul-searching days.

This tower has been photograhed ad nauseum over the years, and you will probably find endless variations of the tower online, but the serenity of the place and the surrounding park were welcoming and liberating. In addition to that Manila deja vu, there were also shades of Thailand and Prague, a peculiar mix no doubt. The vibe was so unique and uncharacteristically devoid of crowds, perhaps because it is Ash Wednesday today so people flocked more to the churches and monasteries. Whatever the case may be, I know this was the right place to launch my expedition.

In addition to the trifecta of clouds, water, sunset, it was a return to street photography as well. Food carts were scattered around the area, each with its own flair and charm.

If there is a park and a promenade you can rest assured there will be a musician of sorts as well. I was too late for the performance, but I did catch the musician packing up his wares.

My Uber driver this evening was a lovely fellow from India, Punjab to be exact. Another person who seems to have found his niche in the world in Lisbon. It was hilarious to listen to him complain about some of the impatient drivers around town, but in spite of the hustle and bustle of Lisbon rush hour, he would not drive in Delhi or Chandigarh anymore even if you paid him! So when I broke out my smattering of Hindi, he chimed in with tidbits about the large Indian community here. Ah, another aspect to discover.

I am calling it a day now, at peace with the knowledge that I paid due homage to peninsular milestone and world history all in the spirit of exploration.