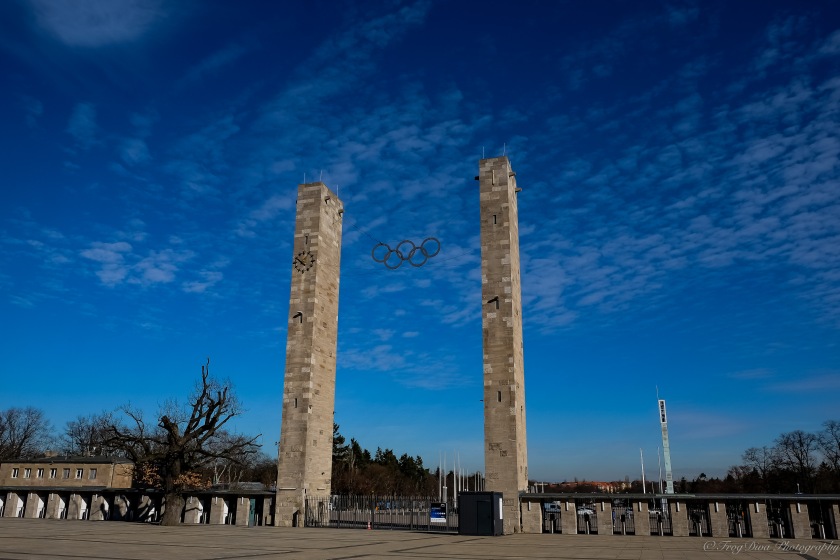 Monstrosity was the first word that came to mind when I first saw the Berlin Olympic Stadium, and this was from the back side (the bell tower side). When I saw it later on from the front side I was impressed by the supreme lack of beauty, the coldness, and the sheer monstrous size of it all. I promised myself that I would return to photograph this historical building when was shrouded in fog and snow, but that was not meant to be.

Originally built in 1909 for the 1916 Olympic Games, the stadium was designed by Otto March. It was then renovated during the Third Reich for the 1936 Olympics. Today, the stadium is homebase to the Berlin Football Club Hertha BSC and inside of the stadium is a completely different world from the dreary exterior.

With a seating capacity of 74000, give or take a few, this stadium is not only used for athletics but is also a favourite venue for concerts, particularly of visiting international stars. Berlin has two large venues that can seat a loud and large crowd, the Olympic Stadium and the smaller but newer Mercedes Benz Arena with a seating capacity of “only” 17000. Pink and Phil Collins are the next big concerts scheduled for 2019, and last year I had the misfortune of being stuck on the train both times with fans of the Guns n Roses and Byonce accordingly. Bizarre, to say the least.

Thankfully, I didn’t have to wait for an athletic event or a concert to visit the stadium, because with my fear of crowds, there was no way that I was going to attend either just to photograph the darn building. On any given day tickets can be obtained at the visitors centre and you can explore about 75% of the area on your own to your heart’s content, and for 8EUR per head, it is a pretty good deal. What you do not have access to are the catacombs, which were used as a crucial command centre during World War II. The stadium was renovated in time for the 2006 Football World Cup and that is the present state you will find it in.

The first thing that will take your breath away is the sheer size and the dimension of the entire construction. And if you have a vivid imagination like I do it is easy to conjure up the tense crowds of 1936. The Jesse Owens story makes so much more sense now.

Would I return? Certainly not to attend any event, but gladly to get lost among the corridors and soak in the patters again. The shadows of the past that accompany you throughout the walk are to be taken in as part and parcel of the experience.