I couldn’t have plotted it better myself even if I tried. Today was one of those days when life was truly stranger than fiction and it all happened within a timespan of 75 minutes.

18:15 – I left the office and walked to my bus stop to wait for the 200 line. According to the schedule it was due to arrive in two minutes. Once I reached the stop, the schedule changed to 12 minutes. Darn. The silly line had just been back to the regular schedule after the World Cup finished and all the barricades around the fan mile were taken down, but now, in preparation for Pride Weekend in Berlin several parts of the city are blocked off for the parade. So I decided to walk to the bus station / train station near the zoo.

18:30 – Along the way I decide to take the subway instead, so I duck into the station and reached the platform just as my train pulls away. The next one was due in 12 minutes. In that time I could resurface above ground and catch a bus instead. So up to the bus station I dash.

18:35 – I reached the designated bus stop only to find all the schedule boards flashing an announcement that no buses were running for an undetermined timeframe because there was a huge road block. Damn. Back to the underground it was.

18:39 – I finally got into the subway, squeezing my way through the crowds. I began cursing all the tourists in Berlin at the moment, wishing summer holidays were over so we can get back to regular rush hour crowds. Why, oh why did the U2 have to be so full today? Then I remembered the radio announcement from this morning – Ed Sheeran is in town town for a concert at the Olympic Stadium, one station before my final stop in Ruhleben. Dang it all to hell! Onward with the Sardine Express.

19:05 – The hyped up fans all get off at the Olympic Stadium and there is peace for the remaining ride. All four minutes of it.

19:09 – Down the escalator I went, gasping for air in a desperate attempt to cleanse my lungs from all the body odours resulting from failed deodorants. It is summer, for crying out loud people, use stronger deos!

19:10 – I stand at the bus stop to wait for whatever bus comes next. Nothing in sight. Oh wait, that’s not true. A drunken street dweller to my left was delivering a speech while holding on to his bottle for dear life. I move away a meter just to be safe.

19:12 – Drunken man stands up and walks past me, grazing my backpack as he stumbled behind me, bends down to place something on the floor, and returns to his bench. All this time he continued talking and arguing with his imaginary friend. I looked down at what he had placed on the floor and there was nothing there.

19:14 – He stands up again and walks back to “pick up” what he put down earlier, still talking to his “friend”… A cold shiver runs down my spine. What if I end up like that one day? Alone, broken, broke, and only an imaginary friend to keep me company?

19:22 – Oh, my stop already? I peer out the window and see the familiar blue and yellow IKEA building. Yes, indeed, this is my stop. Time to waddle home at last. OK. I wait for the light to turn green so I can cross the road, my eyes feeling heavier and heavier by the second from the exhaustion. Whack! Something hit my leg. I turn with my mouth open about to say something forceful, only to realise that it was visually impaired young man’s walking cane that had hit me. He was trying to gauge the edge of the sidewalk and waited for the signal to cross the street as well. So I moved to the right so he could move freely and not bump into me.

19:25 – Light is green for us lower mortal pedestrians. The visually impaired man dashes forward but I end up tripping on the street because his cane got caught between my ankles. I jumped to the side to avoid being caned again, but what do you know I got hit a third time. Thankfully we went in different directions once we reached the other side.

19:35 – I am back on my beloved path through the field. It is the best shortcut I have found. The ground beneath me crunches merrily as I slow down my pace and soak in the peace and beauty of the setting sun. Camera in hand, I aim for a patch of field and lovely low-hanging branch when the branch starts snorting. Snorting? Out comes a water buffalo from under it. Not just one, but the whole herd! 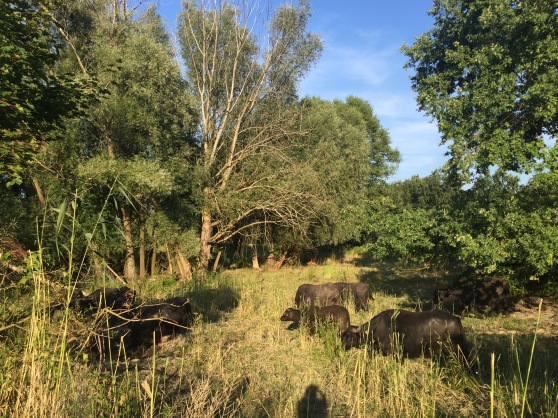 19:40 – I run into a man and his dog, whom I meet pretty much every evening on my way home. The handsome Labrador stops to greet me, trying to sniff my backpack – when he first met me I had a cat in the backpack who hissed at him, and he remembers this but greets me happily anyway. The owner could learn some manners from the dog.

19:43 – I turn the corner and am back on my street. The sun is shining, the fisherman is leaning over the bridge, the ducks are quacking, and… I get barked at by a huge German Shepherd with a branch in his mouth. How can he he even bark with his mouth full? I stop to figure this out but all I get is growl in return.

19:45 – I am at my building and almost get knocked over by a delivery man rushing out the door like a bat out of hell. He makes a beeline to the portable toilet across the street (put up by the construction workers). The urge to pee is marked clearly by the flushed pink face. Will this day ever end?

19:46 – Home and faced by three hungry cats and a rude demanding letter from the German Pension Service.