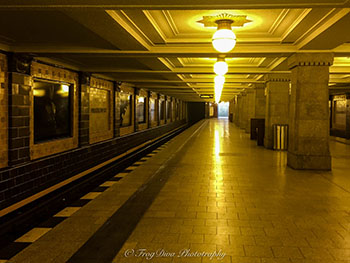 The content and resulting photographs of this blog entry are based on a chapter of the book Berlin Fotografieren by Andreas Böttiger and Nancy Jesse. I was given this book by a fellow photographer and tried one of the suggested phototours for the first time: Unterwegs in Berliner Untergrund (On the Move in Underground Berlin). Like the other chapters of the book, this one will have you walking and jumping on and off public transportation in different parts of the city, which is actually a fantastic way to get to know Berlin if you are not the type, like me, to join organised tours. Admittedly, this is an adventure best shared with like-minded people, because you have each others backs, especially if you get caught or scolded by the authorities.

The Berliner Untergrund Phototour consists of a series of subway stations along the U7 and U3 lines, and if you know your way around Berlin, this means Spandau, Charlottenburg and Wilmersdorf, all areas that are equally interesting above ground, but on a dreary rainy day, when you want to take the camera work a workout but don’t want to get wet, then this is the perfect option. A side note: the route includes two aboveground explorations in the Siemensstadt and Westernstadt which we left out this time due to the rain. Also, the route in book begins in Heidelberger Platz and ends in Spandau, but since I live in Spandau, we began in Spandau and worked our way backwards.

There is one major catch to this particular photo tour though… don’t get caught. One thing to keep in mind with urban photography in Germany, you are likely to need a permit in certain places, especially if you are going to use a tripod. The Rathhaus Spandau subway station is one of the more ones if you ask me, even though it may not be old, but the dimensions and architecture are certainly worth the effort. It was so interesting that we spent a bit too much time there and drew the attention of the station authorities who had already spotted us on video. It wasn’t long before we were approached and reprimanded in a courteous, friendly, but firm manner. A couple of shots were no problem said the man, but the fact that we had lingered around a while, set up a mini stabiliser brace on the railing (in place of a tripod), and possibly caught some of the passengers faces in some of the shots, necessitated a permit. So, off we went to the next stop along the U7 route.

The Rohrdamm Station is blast from the retro past. Relatively recently restored, it screams out in vibrant red and yellow, and I had the impression of being in a giant Lego museum rather than a subway station. Unlike the first station, there were no visible guards on duty, but it was definitely being watched by video. So I decided to switch my brain to street photography mode and shoot fast.

The Paulsternstr. Station I didn’t bother to photograph. It is certainly worth a look, but in my opinion, not a photograph. First of all it is a very dark station and even though the wall design is perky enough to make you feel like you are lost somewhere beneath the zoo, it doesn’t have a wow factor.

Next along the line is Siemensdamm Station. Many will consider this green, blue and orange colour scheme nauseating, but the vintage effect and the images pay tribute to the hard working men and women who dedicated their lives to the Siemens conglomerate over the years, building up almost an entire city around the factory. If you go by the book, this is one of the stations where you can go above ground and explore the  area, which is certainly not a bad idea if dry weather is on your side. It will soon turn into a ghost town once the production arms move to Eastern Europe in the next couple of years.

Next station was Fehrbelliner Platz. Now most commuters who use the U7 and U3 will know this one by heart, but probably never really stop to pay attention to it that much, let alone know what the name means. The plaza, and station, are a tribute to Prussian military strength after the battle of Fehrbellin in 1675 when the Prussian forces thwarted a Swedish invasion. The station is now a junction between Charlottenburg and Wilmersdorf, and you will find no shortage of public transportation options here to reach any point in Berlin, both and above and underground. At this point, the U7 line intersects with the U3 and you notice a stark shift in design. The restoration of the U3 stations is in progress, but unlike the U7 that has chosen to go modern retro, the U3 sticks to the classic vintage designs with historical photographs on the walls and mini sculptures embedded around the station. I’ve pass this station so often but never noticed the detailed acorn design of the railings or the horse-drawn carriage sculptures in the wall.

The last station on the list is Heidelberger Platz but my sense of direction when a bit whacky after being underground for a while, so we got off at Hohenzollernplatz station, which is actually a fortuitous mistake. This station is under Denkmalschutz historical protection) because the 1909 cornerstone and the station marked the beginning of the Wilmersdorf – Dahlem carriage route. Newly restored, the lamps and ceiling details give this dark station an old-world charm that reminded me of Paris and Vienna for some reason. The paintings and enlarged old prints on the walls will give you a sense of being in a large gallery as well, were it not for the passing trains.

By the time we reached Heidelbergerplatz I was beginning to crave for fresh air and the world above ground again, but I didn’t want to forego this lovely station that I have always admired. I don’t have a clear shot of this station because I switched to shooting with my iPhone. This is one station that never runs out of people or guards, but definitely worth the time. Not only are the historical photographs interesting, and the old lamps fascinating, but you will find different animals carved into the pillars. My first find? Frogs!

There are several ways to end the tour, and ours was to continue to the Augsburgerstr. station and walk above ground towards the Kurfurstdendamm, ogle at the ridiculously expensive interior design shops and then turn the corner and hit the designer boutiques along the (in)famous Ku’damm. Take your pick of cafes and restaurants along the way to quench your thirst!