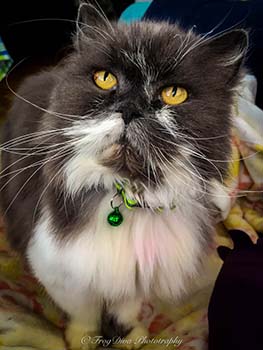 We have made it to the two-month hurdle! And it is a good reason to celebrate. The cold spell over, The Beast From the East has left Berlin, and yesterday I spotted the first crocuses popping up! My dear senior cat, Kessy, who was given between four weeks to four months to live when I adopted her in January, has reached two months with flying colours. Today she tipped over a bowl of soy sauce and splashed some of it on herself, but she was cool about it. She shared the water fountain with Champagne, and came decided that sunshine was a good thing.

The other day I moved furniture around the apartment again in preparation for Spring and an inner need to change the Feng Shui. Champagne is used to all this and she took it all in stride, riding on the sofa like Cleopatra while I pushed it around. Kessy, on the other had, is not a cat who appreciates change. She flew into a panic and ran back and forth while all the furniture was pushed aside. Once the sofa was in place, Champagne jumped down and went around to check the other items before walking off for a snack. Kessy jumped up to the sofa, sniffed it all over, surveyed the new arrangement and settled down to guard it. For the first time in the two months that she has been with us she did not sleep in the room with me. Otherwise she is the first one in bed and warms up the spot where my feet go. But that night she refused to take her eyes off the sofa and guarded it with her life, terrified that it would walk off without her.

When I left for work the next morning she was still guarding the sofa, taking only short toilet breaks, and when I returned in the evening she was still there. Two days later Kessy deemed the sofa safe and came back to sleep in the room with me. She does get up more frequently though and goes out for a quick round, declaring it snack and drink time but what she really wants to do is check on the sofa.

Otherwise the Queen Mum has become an adorable companion. Like any other senior citizen, she forgets where she was going or what she wanted to do in the room she entered. She will fall asleep in front of her food bowl and water fountains, and photographing her is tricky. Not only does she fall asleep in the middle of the shoot, but she doesn’t really see the point of it all, unlike Champagne who will flirt shamelessly with the camera and anyone else who pays attention to her.

Yellow From the Other Side

All About The Woman