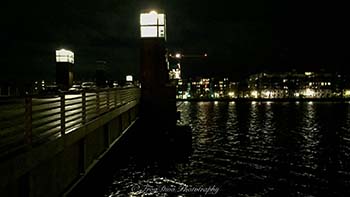 The Spandauer-See-Brücke is of no historical value in the sense that it was not intended to change the face of Berlin history, nor is it medieval or even pertaining to any of the wars that made Berlin what it is today. Heck, it cannot even be considered old since it was finished in 1997. But the Spandauer Lake Bridge is definitely one of the more unusual bridges in Berlin.

Instead of statues it has huge geometric pillars that prove that this was a structure designed by engineers, nor artists. Try as you might, you will not find anything similar elsewhere in the city, nor is it flooded with tourists or curious visitors. In fact, unless you live in Spandau, you will probably never even stumble upon it.

There is very little documentation on this bridge, and I found it quite by accident while looking up the history of another bridge in Spandau. Curious, I decided to take my chances and see whether it was worth the effort. Given the peculiar lamps built into the pillars I opted for a night shoot to see what I would end up with.

One thing is for sure. It was dark enough and definitely cold. Bloody cold. There was no chance of falling into the water this time or even getting caught by the Harbour patrol, but what was frustrating was the fact that only alternate pillars were lit, not the entire row. City administration has realised that the bombastic and brilliant engineering is expensive to maintain and the electricity bill would bankrupt the coffers in no time.

There are a total of 11 bridges in the Spandau area of Berlin alone, all traversing the Havel river, but my favourite is this one.