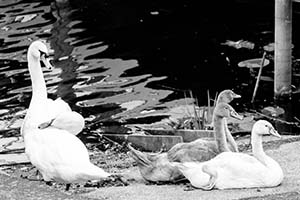 As someone who has lived in a large metropolis most of her life (Mexico City, Delhi, Manila, Bangkok, Berlin) being in close contact with nature on a regular basis is a rare thing. In Kenya I had the privilege of spending many weekends with my parents going on safaris, spending hours inside the car waiting for a pride of lions to wake up so Daddy could photograph or film them, or spotting elephants, cheetahs, and rhinos from afar but still in their natural environment in a national park. The concept of zoos later on was always a bit of a shock having spent a good part of my childhood watching animals roam free on their terms. Living in a large city, however, meant getting in touch with animals  only in a zoo or having small house pets. Farm life and camping were not my thing, so my animal world narrowed down to cats, parrots and dogs, with the exception of the time we had geese.

When I first spotted the swan family in May, the fascination was child-like. It is the first time that I was able to watch their family dynamics at such close range and with such intimacy. Seeing the little ones snuggle under the mother’s protective wing was something straight out of a fairy tale for me. From a brood of six, the family dwindled down to three children, but they continue to visit the dock every day, three times a day.

Up until recently, I thought I was the only one in the building keeping an eye on the swan family. But after the recent floods in Berlin that clogged up the dock with debris, the swans stopped coming for a few days. The neighbors rallied into action and one morning I looked out the window and saw some of the neighbors cleaning up the jetty. The swans returned that very afternoon. And someone pinned a thank you note at the entrance, thanking the families who took the time to clean up that morning “for the swans”.

It has been a joy to watch the transformation of the scared cygnets into characters from The Ugly Duckling, and then playful young swans testing their new strength. Now they are sulky teenagers with their own streak of independence, like humans, but still attached to the ever protective parents.

My cat, Champagne, is equally fascinated with them as well. She has never seen swans before, and the swans got a glimpse of her today for the first time as she explored the balcony (and that of the neighbors!). Then entire family turned their heads to watch this twit of a cat walk precariously along the edge of the building, but she sat quietly and stared down at the large birds. It was almost a comedy in two parts since I didn’t know whom to focus on, the five swans stretching out their necks full length or the dwarf Persian cat on the ledge.

Life in Spandau can be very educational. I have learned that the back “ducks” that noisily  swim by are not actually ducks but coots (Blässhühner). Foxes makes obnoxious noises when in trouble. Raccoons in trees always look guilty, regardless of what they were or were not doing, wild geese can throw hilarious temper tantrums, and dogs comes in all shapes and sizes but when they are big enough to be mistaken for bears or ponies, I stop and stare. Bear dogs (Bärenhunde), Otterhounds and Newfoundland dogs are a recent discovery, and so is my respect for these giants. Adorable as I may find them though, there is no way I could ever own one because I lack the height and strength to handle them!