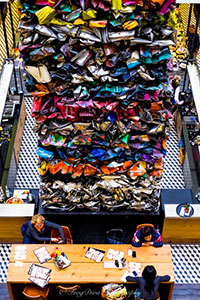 May 26, 2017 FrogDiva Berlin Through Frog Eyes, Photography Leave a comment

I had lunch at the Borchardt Restaurant in Gendarmenmarkt, the former French quarters of Berlin, the other day. This is not an area I venture into very often, and of all days, I had to end up there the day before the Kirchentag 2017, but anything for a friend who flew into town on business for a day. The Borchardt is a classic in Berlin, priding itself in the exquisite (and efficient) service and an atmosphere to remember for years to come. You walk in and feel as though you have stepped though a time portal back into the glamorous 1930s, with the old wood finishings and classic interior. This is a place where your overcoat goes on a hanger instead of a hook, and you get a claim stub instead of a backache trying to locate your coat. Beginning to get the picture? It is no surprise that this happens to be Tom Cruise’s favorite restaurant in Berlin! (no photography allowed inside)

Outside the restaurant, the Gendarmenmarkt gives you a feeling of being in Paris or New York, surrounded by the top designer labels of the world interspersed with the major multinational companies and law firms. It doesn’t carry the grandeur of Potsdamer Platz which makes you feel as if you have entered a futuristic hologram . Instead, the old world charm tightly interwoven with modern hotspots gives this area of Berlin a true feeling of metropolitan power. What you definitely won’t find here are the medium to low-end department stores and discount supermarkets. On the contrary, the premier chocolatiers have their ateliers here, alongside Gucci and Rolex.

Even trying to find an ordinary bank is a challenge, and when I stumbled into the Galeries Lafayette, I knew I was definitely out of my waters. For the sheer aesthetics of it all, the interior architecture of this building gives you a more unique experience as compared to the KaDeWe over at the Kü’damm, although nothing can beat the range of products the KaDeWe offers. The Galeries Lafayette architects seemed to have continued the theme of intergalactic ice cream cones like in the Reichstag, but with a twist. Instead of looking down into the parliament in session you get a breathtaking panoramic view of a food court.

As we strolled around the area wondering why so many of the streets were blocked and the police were out in full force, (note that this was the morning after the Manchester Bombing), we entered another shopping gallery called Quartier 206, or simply The Q. It’s not the shops or the cafes that will take your breath away (the prices might though), but the huge installation of a John Chamberlain sculpture called the Tower of Klythie that rises from the basement floor all the way to the top of the building. The sculpture is made entirely out of old cars, giving and entirely new meaning to the word “scrap metal”.

Like many other things in the Gendarmenmarkt, the Tower Of Klythie is not simply a sight to behold but an experience that leaves an imprint in your memory. Unless you have money to burn, the Friedrichstrasse and the rest of the side streets in the Gendarmenmarkt are more suitable for window shopping and ogling, but I assure you that you will not be disappointed. Have a praline at Rausch Chocolatiers, a cup of cocoa at Ritter Sport, a croissant at Cafe Einstein, and shake your head in wonder at Gucci and Cartier. If all else fails, sit on the bench in the middle of The Q and stare at the Tower of Klythie or find your center beneath a tree at the French Cathedral.