Moving, packing and unpacking are what I consider to be three of the most unpleasant experiences in life. I have had the misfortune of doing so 15 times in my lifetime and the older I get the more cumbersome it becomes. The emotional roller coaster that a relocation puts a family through is comparable only to a death in family, with all the upheaval, transplantation, starting over, uncertainty and disorientation involved. For the children, regardless of age, it means separation from school and social circles that they are dependent on psychologically and emotionally. No child, tween or teenager appreciates being the new kid on the block and the odd one out in school, and not all children find it easy to make new friends (or adults, for that matter).

Each relocation has had its share of complications with logistics as well. One packing crew in Bonn was so fast that they packed up the garbage as well, and my bucket full of cleansers that I needed to spruce up the unit before handing it over! Another crew in Berlin had trouble getting a couple of of the larger pieces of furniture out the door and down the staircase, so large conveyor belt was installed from the balcony on the sixth floor straight down to the ground floor to the waiting van. My heart plummeted when I saw the 120-year old cabinet being loaded onto that conveyor! When I left Manila in 2010, the image that remained clear  in my mind was the crew member sitting quietly on the floor packing up my 1500++ frogs. 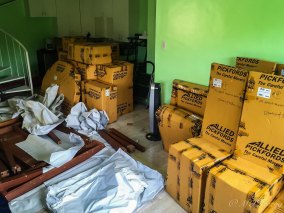 The recent arrival of my container in Manila was met with a lot of complications with customs. Suffice it to say that the cargo was held up for over a month at the Manila Port and a lot unpleasantries were exchanged, with tempers flaring in all directions. I was slapped with a tax that was so ridiculous for used personal goods that did not even include any electrical appliances. What I was being asked to pay almost exceeded the total value of the cargo itself, and this was one of the times when I decided to be bullheaded and not give in to alternative modes. Nevertheless, it was a very frustrating month full of anxiety and aggravation, making me question the state of the nation in general and what direction government agencies are taking for the next six years under the current administration. Experiences like these can certainly ruin any homecoming, as well as the image of the the country whose slogan is “it’s more fun in the Philippines”. One thing is for sure, if you are dealing with the Customs Authorities here, it certainly isn’t!

To make a long story short, my cargo was finally delivered last a couple of days ago and it was like Christmas! I took up my familiar post outside by the van with the packing manifesto and checked off the items being offloaded. I’ve done this so many times for loading and unloading that it came so naturally, the only difference being that this was a much smaller cargo than usual. It wasn’t the first time either moving from a large residence into a much smaller one, and space management is always an interesting challenge to take on. Having the right carpenter on hand helps a lot as well.

Unpacking boxes can be a real pain, especially if you procrastinate too long. I’ve learned over the years that it is better to unpack everything and throw away the boxes immediately than to leave them in storage until I have time. That is how I ended up carting unopened boxes from India to Manila to Berlin and back to Manila! Nope, it’s best to face the box nemesis with faith, patience, and practicality. The perfect day to unpack boxes will never come, so might as well do it today. Trust me, it is much easier to put things away (or at least try to find spaces for the items) than to ignore the boxes. I believe in order and system, so when faced with all the stuff lying around on the floor or filling up the tables, I will not be able to sit still until I have cleared up the space, and that way I know that I have accomplished something. Besides, I hate living with boxes. Piles of sealed boxes are an indication of not having fully “arrived” yet. It is an unrealistic clinging to the past, hollow hope that a better time will come along.

The older I get I realize that boxes are a bane to my existence. I dislike the lack of clarity they present, and want to have everything in front of me, within reach. I have tried the one-box-a-day method and it didn’t work. I just got more and more frustrated with the all the hundreds of unopened boxes remaining. Years ago, in my early 30s a met a woman who was in the process of writing a box about decluttering life during midlife. I scoffed at the idea then but realize now how much truth there is to the matter. Indeed, there comes a time in all our lives when we look around and realized how much junk we have accumulated over the years, how much unnecessary stuff has piled up in the storage room (or attic or basement) that we haven’t touched in the last 20 years. Just think of all the additional closet and storage space you can free up by decluttering your life… that dark and messy basement can become a man cave, or study, or even a photo studio! Take the time to clean up, throw out, and breathe in the new possibilities.